If you’ve recently been wondering how to look after your skin better, but don’t want it to cost the earth; then this post is for you.

I’ve always been quite lazy with my skin, as its never really been an issue for me but I now totally regret not looking after it earlier.

Here are some simple and not overly expensive steps to looking after your skin:

Rule 1) Always remove your make-up, no matter how tired you are, leaving makeup on your face not only blocks your pores but ages your skin too.

Rule 2) Dry brush your body everyday, it will only take a minute. The benefits of dry skin brushing are so worth it, they are:

I highly recommend Ithyes Dry Brushing Body Brush from Amazon, its only £5.98 and if you have prime then its free next day delivery, the link is here https://amzn.to/2S0XNFK

Rule 3) Cleanse, tone and moisturise your face both morning and night if you can, face cream can also work as a primer under your makeup and protects your skin at the same time. It is always good to check that your moisturiser has UV protection for all weather.

This doesn’t have to be expensive, I use no.7 products and always get the gift sets from Boots at Christmas time when you get around £150 worth for products for £39. You can try other brands too like L’Oreal and Garnier for a few pounds each, either from Boots, Savers or Amazon and many other shops i’m sure.

Rule 4) Moisturise your body before bed, this is the best time to moisturise as you’ll be inside and hopefully asleep leaving the moisturier to do its work.

Rule 5) Final tip, if you use fake tan never ever ever ever ever re-tan without fully removing the older tan before hand, making sure you exfoliate and give you skin a break.

They were my five basic tips to looking after your skin. I hope you found them useful.

Waking up before my alarm goes off with my heart racing so hard I wonder if i’m going to be sick, or if something must of happened causing me to wake so quickly. I lay there and realise the house is still quiet, both kids are asleep, but in that silence I feel my heart still racing and I suddenly realise its just my anxiety.

Now when I say just my anxiety; I cant even begin to put into words how crippling it can be some days, how strong minded you have to be to even function to get the children to school in a happy mood. Walking into the loud, ridiculously busy playground when your still mid anxiety attack is hell, kids running around shouting, playing football feels 10 times louder then it normally does, your sight goes to tunnel vision and your just trying to keep a straight calm face until you can run home and hide under your blanket.

Anxiety doesn’t care what you have going on in your life, if you have appointments you need to get to or events you’ve been looking forward to for months. If anxiety wants to attack, it will and you have to manage it the best way you can.

I never thought i’d be the type of person that would have anxiety attacks, apart from being a bit of an awkward child, I pretty much just got on with life as best as we all can. I’d go out with my friends after school everyday, have sleepovers at the weekend and just do normal kid things.

I remember my first major anxiety/panic attack very well. My friend and I had just met up with a few other people on the way to the pub, I was 18 and went from fine to face sucked in and not being able to breathe in the matter of a minute. I remember thinking “Am I going to die?” “Is this really how my life ends?” I had no idea what had happened and just remember staying in for a few weeks after (completely unlike me) scared it might happen again.

Nowadays I live with anxiety most days, anything can set them off, but over time I have realised a few triggers:

Some but not all of the possible symptoms:

Here are a few things that could help:

Now instead of the major panic attacks that I felt when I was younger, they have changed to heart racing, dizziness with shortness of breath. Luckily on most days I am still able to function without anyone really noticing.

If your feeling like your anxiety is starting to affect your life, please talk to someone and I really cant recommend EFT enough. If you don’t like the look of the pocket book their are many more out there to try and also many practitioners that can help you.

Good luck and thanks for reading. 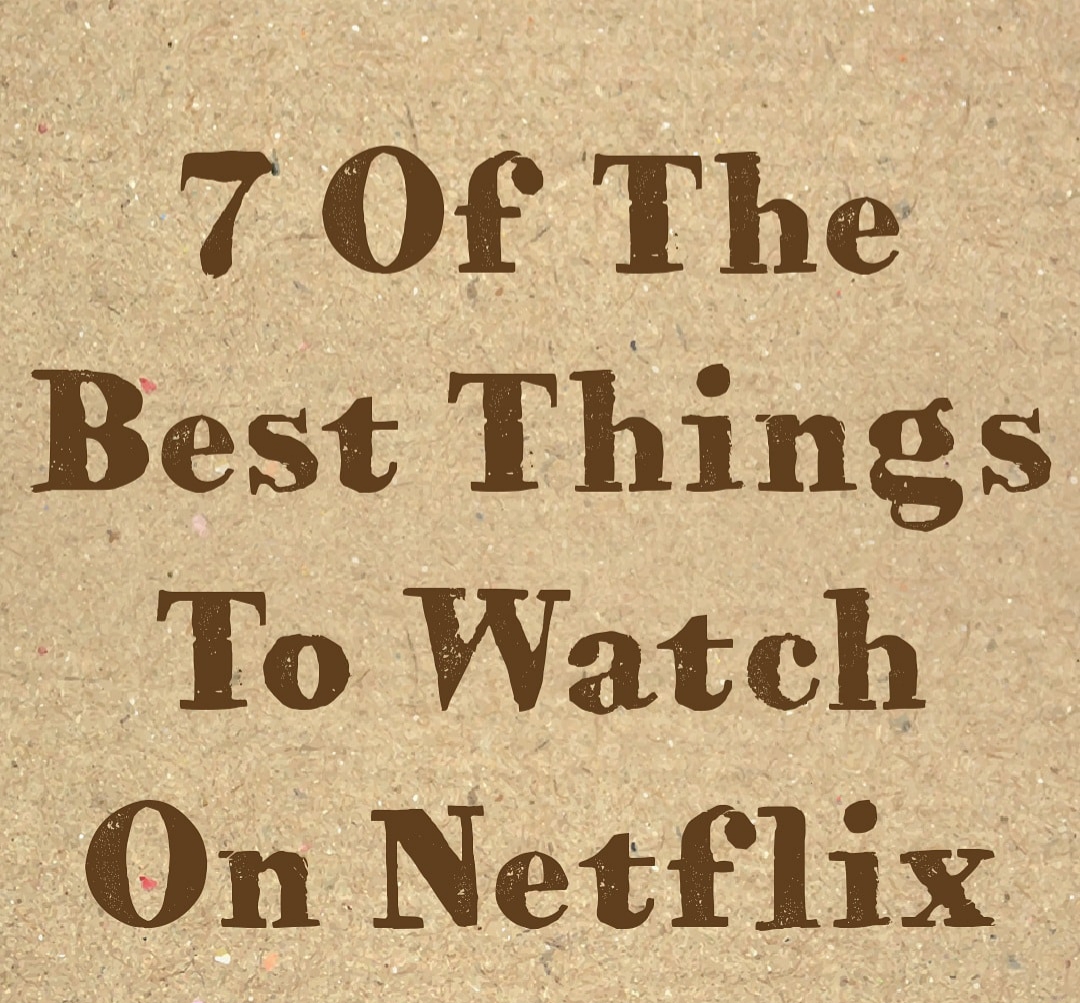 I could sit and binge watch series and films on Netflix for days, and sometimes if i’m feeling a bit rubbish or just generally cant be arsed to do anything then that’s what I’ll do.

Apparently research says that we should all have a least one lazy day a week to recharge our batteries and protect ourselves from getting burned out; and as far as i’m concerned that sounds like enough reason for a Netflix day to me.

So here’s my list of the 7 best things to watch on Netflix:

I watched both series of YOU over two weeks, its absolutely brilliant! The first episodes a little bit slow but you’ll soon get drawn into the main character Joe’s life and how he generally believes his way is completely normal behaviour. The first series is based in New York, where Joe manages a book store and turns out to be a serial killer. Its one of those series where you’ll keep watching and realise its 2am and you should probably go to bed.

Netflix has four series of Line of Duty to keep you entertained and it doesn’t disappoint (I’ve watched them more than once). Based in London this police drama is an Anti-Corruption Unit known as AC-12 that investigates other police officers. The main character is Steve Arnott who most coppers love to hate but always gets the job done. Plus there’s just something about him.

This film is hilarious, literally my face ached after watching it and my husband found it funny too. Its two very different women that both hustle in their own way, one just to get by and the other to be as rich as possible. Definitely one to watch when your in the mood for something silly.

If you love watching American CIA programmes then this is the series for you. Kerrie is bipolar and literally has no fear of anything, she works for the CIA and finds herself in lots of difficult situations. She is head strong and how she stays alive is beyond a miracle. A must watch.

OMG I love this series. There’s two series, both only have five episodes each. Its about a doctor whose husband is having an affair with a much younger woman, his wife doctor Foster is out to destroy him once she finds out and that’s all i’m going to say. If you haven’t watched it make sure you do, its another binge watching series for sure.

This really is a “what the fuck did I just watch” documentary. I really don’t know what to write about this documentary, I had to rewind it back a few times to see if I heard it right. Its a true story of a man who managed to get half the family to sleep with him and kidnapped their child right under their nose. Its heartbreaking but I just couldn’t stop watching it and certainly one you wont forget in a hurry.

I first watched this in the cinema a while back, it’s a such great film. Two completely opposite mums, the super organised I got my shit together mum and the drinks and works too much mum that turns out to have a dark side. There’s twists and turns in this film that you don’t expect so I wont ruin them for you, but this film is a must watch.

So what’s your favourites Netflix watches, let me know in the comments?

I don’t know about everyone else but my absolute favourite sale in the Christmas holidays is Boots. Not adding to the 20 plus pairs of boots that I already have under my bed and stacked up on shelves in my wardrobe but adding to the 20 plus bubble baths, lotions and endless makeup collection that I have in my bathroom.

Its only the 23rd January and I have already hit the Boots sale three times in three different shops, so don’t be fooled by the website saying that items are out of stock, the shops still have plenty left to snap up and at 50% off why wouldn’t we?

Here is just some of the bargains I managed to get:

Zoella Lifestyle Planner £14 down to £7! (I absolutely love this!)

Not only did I buy these, I also went a bit bonkers on the Ted Baker makeup, Sanctuary spa sets and men’s Superdry gifts.

So if you haven’t already got your yearly supply of bath bombs, lipsticks and bubble baths, now is a great time to grab a few bargains (and stop me buying it all).